What is 5G and 3 Biggest Unknowns 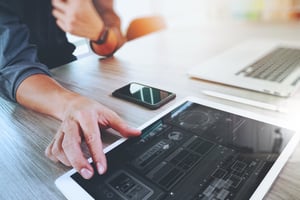 Near the end of 2017, the wireless industry collectively developed the first official 5G “5th generation” standard. How users of 5G will benefit remains to be seen, but the promised leap of technology with 5G networking looks to be a certain game-changer. AT&T plans to launch mobile 5G networking in the US this year, Verizon says it will launch home technology for users of 5G, and both T-Mobile and Sprint say that they're launching 5G phones early next year.

What will 5G networking look like for end users, and how did we get here in the first place? Users of 5G will doubtless remember humble beginnings and fully appreciate the new capabilities 5G networking will bring.

How did we get to the threshold of 5G? What technological advances brought us here? And what is 5G, anyway?

While each of these aspects have grown in importance through the years, 5G promises such leaps of advancement as to usher in a whole new level of technological achievement.

Users of 5G will depend on denser arrays of small antennas and the cloud to provide unprecedented data speeds up to 50 or 100 times faster than current 4G networks, as well as a larger carrying capacity. 5G networking will employ internet speeds that will surpass that of cable broadband and fiber optic cable. This will allow users of 5G to browse high-quality video content on mobile devices, including 4K, 3D, and virtual reality content, with the same or an even better experience than watching cable tv.

5G networking will achieve a reduction in network latency, or lag, to one millisecond. This is quicker than the speed at which humans perceive audio, visual, and physical response as instantaneous. Current 4G LTE latency ranges from 20 to 50 milliseconds. The perception of immediate response when combined with touch-based feedback, will enable new wireless applications such as remote driving and even remote surgeries.

Increased connectivity volume means that vast amounts of data will be carried at speeds that will allow for cars, machines, cargo, and crop equipment to be connected to an “industrial internet of things” (IoT). Large-scale and complex processes like supply-chain coordination, fleet management, industrial agriculture, and city traffic flow will increasingly be guided by connected devices.

5G Networking - Will It All Work?

While such astounding advancements are certainly within the realm of understanding and possibility, questions remain. Potential users of 5G want assurances of actual usability. Three main questions seem to arise often.

Will 5G Networking be Reliable?

Communication technology experts affirm the extreme reliability of 5G networking. A guaranteed airtime and data rate is vital for safety, when, for instance, the network is supporting self-driving cars.

Will 5G Networking be Scalable?

5G will have the ability to scale and adapt across an extreme variation of scenarios like uniform, fiber-like broadband services to ultra-reliable, mission-critical services such as controlling the power grid or remote medical procedures, where failure is not an option.

Will 5G Networking be Secure?

Potential users of 5G have unanswered security concerns. 5G networking must support high reliability while providing a security guarantee. More networking and more users with more connected devices, both large and small, provide more security issues than solutions. As always, the reliability of the end user factors into overall security.

The excitement surrounding the rollout of 5G networks for public use can be felt in every corner of the technical world. In fact, the wireless industry’s trade association, the CTIA, has declared the rollout of 5G a “race” between the United States and the Asian nations of China, Korea, and Japan. The usefulness of 5G internet seems too good to be true for potential end users, but some major 5G unknowns remain to be solved.


Despite the long-anticipated delivery of the first 5G specifications in June 2018, and a test network already up and running in New York City, 5G unknowns generally center on three major questions.

Due to the specific frequencies of 5G, obstacles like buildings can block or distort signals, making its use unreliable. That means numerous small antennas must be installed throughout an area using 5G. In dense urban areas, this could mean hundreds, even thousands, of antenna sites. How feasible is it to hang all those small antennas?

The United States government has made the 5G rollout a national security priority, but actually providing 5G internet to consumers is already facing opposition from businesses, city councils, private groups, and legislators concerned about multiple issues connected with 5G unknowns.

5G technologists are pushing for greater decentralization by deploying microcells closer to street-level (imagine one on every lamppost). This would vastly improve the quality of available service and lower power requirements.

However, arguments over space rental fees, concerns about cancer, and issues with historical preservation have put the brakes on expanding 5G wireless internet services all across the country. A cell that would take a single hour to install requires a permit that could take 18 months to secure. Proponents fear this could kill 5G in the US.

The FCC is investigating options for reducing the burden of siting requirements, including simply exempting the required review of small cells needed for 5G. As you could imagine, every proposed solution faces opposition by someone.

Network densification is “adding more cell sites to increase the amount of available capacity.” Cell sites placed in capacity-strained areas add more capacity where it is most needed and also help offload traffic from surrounding sites.

As noted above, 5G will need very high frequency bands, which are only effective in a small radius. This means potentially massive numbers of small cell antennas. In urban areas, the radius of an antenna is about 250 meters. So, in a large city the size of London, England, approximately 500,000 small cells would be needed.

In rural areas, a large site could have a number of antennas for a large area, but multiple towers would be needed over more populated, busy areas. Here, issues such as permissions, property rental fees, erecting multiple towers, and fear of other 5G unknowns will almost certainly cause problems that slow the process of developing a working network.

Yet another of large 5G unknowns is who will benefit and who will suffer. Will 5G only benefit mobile users? Will it replace fiber and ethernet applications? Obviously, the higher capacity and lower latency of 5G will benefit mobile users and the internet of things. But because of the needed density of antenna placements, at least in the early stages of 5G, consider adding fixed wireless.

In outlying areas where concentrating the necessary 5G infrastructure will prove difficult, fiber and fixed wireless connections will be necessary to provide needed services. While 5G is similar to Wifi technology, 5G-based services communicate on different radio frequencies to standard Wifi technologies, and they use different hardware and communication methods.

While 5G internet solutions promise much in the future, and these promises and more will inevitably be fulfilled, fiber, ethernet, and fixed wireless will continue to be used in certain areas and applications.

Mika Skarp, CEO at Cloud Street, says, “Yes, most certainly 5G will replace Ethernet, but it will do much, much more, and it needs to. Though 5G won’t replace the fiber backhaul any time soon, the shelf-life and cost of fiber, and the lowering cost and dramatically improved flexibility of virtualized RAN make it increasingly prohibitive.”

But, he also affirms, the day of 5G is certainly coming. “Now, instead of settling for a dumb pipe to a sluggish and unreliable wireless access point via WiFi, or last generation cellular, a 5G base station will provide coverage from hundreds of meters to tens of kilometers, at some 100 times the capacity or latency that even the fastest wireless connections can provide.”

In spite of all the 5G hoopla, the fastest, most secure, and most scalable internet solution is fixed-wireless internet, and the place to start is with MHO. We're a well-known and widely-used provider of fixed wireless that can offer the speed, bandwidth, and latency needed for your particular industry. Give us a call or connect with us online and let us help you get started with a powerful new option in internet access.