3 Scary Things That Will Keep IT Leaders Up at Night 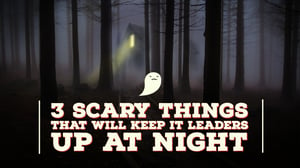 Technology of varying levels is imperative for businesses both large and small. As a CTO, CIO, or leader of a tech team, you have many frightening responsibilities. The success of your company can soar as high as a full moon, or plummet to grave-like depths, according to how well you:

Many times these tasks can seem like rebuilding the Frankenstein monster. The nature and complexity of the job and its demands are enough to keep all but the bravest IT professionals up at night. After working with many of these leaders, MHO has compiled our list of the 3 scariest things that can keep IT leaders up at night.

Even the bravest IT professional quails at the thought of confronting this monster. When your network is down, the ticker on lost productivity and lost sales begins. No one is working, no data is being shared, but you still pay for everyone’s time. And how many deals have just been lost to other companies with a functioning network?

Every second on the clock has the potential to cost you thousands. And even the gold standard of downtime (“four nines” - 99.99% uptime) leaves almost half a day of downtime per year. According to Information Technology Intelligence Consulting (ITIC), an hour of downtime costs 98% of businesses at least $100,000. That’s enough to freeze the blood in anyone’s veins.

What you and the victim of every horror flick need is an alternate way out. You need a disaster avoidance plan that includes redundant systems to prevent network downtime. And you need to test it regularly to ensure it is ready at a moment’s notice.

In every horror movie, the monster seems to know when to strike — when and where the victim is most vulnerable. Cyber hacks are like that. The common saying is, “it’s not a matter of will it happen, but when.” Have you ever screamed at a scary movie, telling the actors the way to escape that they are missing? Your ability to build a contingency plan is what differentiates you as a great IT leader — and may guarantee your survival.

MPLS allows your company to route valuable data privately and securely from one central point of control to other company connections. Simplicity is key, reducing the number of vulnerable points in your network.

With an MPLS network, your IT team can control how and when company team members access and use network resources from one location. This means greater control over the network and better security for communications.

MPLS is a private network you control. It is separate from the Internet and therefore considered a secure transport mode. Companies sharing data between multiple locations are much more secure because they avoid the Internet while sharing data.

Perhaps the worst part of a horror movie is watching the victim wait while the monster slowly approaches and the background music rises to a fever pitch. It feels the same while waiting for a page or function to load on a slow company network. The speed of your network affects all your critical business operations.

Just like idling gets zero miles to the gallon, waiting for the network to respond earns you zero dollars, but costs you in productivity. Depending on your business, mere seconds can equal millions of dollars lost. That is one scary proposition to be avoided.

Latency is a problem to be avoided like the plague. It can mean network issues, last mile problems, or even an outside intrusion into your system. You need to examine every angle to eliminate potential latency threats.

MHO Ethernet and Network Services offers solutions to ward off the scariest and most bestial IT problems before they can drain the life from your business. Before an IT monster strikes, call MHO to discover how we can help.

As an IT professional, what issues do you fear the most with your company network and communications? Share your responses in the comments section below.

[Infographic] Habits of a Successful IT Leader
What is Metro Ethernet?
Preparing Your IT Department for 2021
Checklist for Reopening