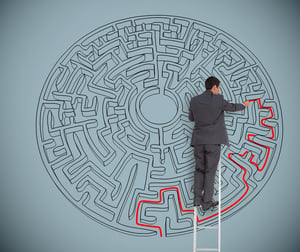 The terms “last mile” and “local loop” are likely familiar to anyone who provides or utilizes network connectivity. The last mile, also referred to as “local loop,” is the actual, physical connection between the Internet Service Provider’s core network to the end user’s building.

Because of issues encountered at this stage of a connection, it's often referred to as the “last-mile problem.” Historically, last-mile connections have been affected by a number of technological issues for end users and are associated with distinctly high costs.

Across these last-mile connectivity forms is a common challenge: this link, which comprises 20% of the network fabric that actually reaches the consumer, can be incredibly expensive. In fact, that 20% frequently accounts for 80% of the overall network costs—a real challenge for both providers and customers.

Further complicating the last-mile problem is the issue of data security. The need to securely transport data across complex networks—from corporate servers through firewalls and cloud storage platforms all the way to the end user—is critical for businesses, but the labyrinth of last-mile connections can make doing so seem nearly impossible.

From the perspective of the end user, the last mile is often where network performance suffers. And this final stretch of an internet connection is also where providers have the least control. Issues such as artificial network congestion, latency, and slower speeds often occur at the last mile. In fact, the last mile portion of your network all too often does not belong to your provider, but to another company.

Issues can also crop up around the customer experience when a provider is using another carrier’s network to deliver the last mile. If a customer experiences a problem with last-mile connectivity, your provider will not be able to address any issues directly. Instead, that provider has to contact the last-mile carrier to do any sort of troubleshooting. This adds an exorbitant amount of time to the process, likely leaving the customer frustrated.

What Businesses are Doing to Address the Last Mile Problem

So how can businesses address the issues associated with local loop and last mile? Here are some examples of how a few businesses have tackled the problems.

Fletcher Jones Management Group is the largest privately-owned Mercedes-Benz retailer in the United States. They were looking for a new way to connect their networks between multiple locations. Although they were already working with several vendors, they were referred to MHO as a way to provide better connections and offer necessary redundancy in case of failure.

Connectivity was a major concern because of some more remote dealership locations. Reliability is always a factor with businesses that cannot afford downtime. Scalability was vital due to the need for multiple system operations connecting to a data center. Different locations throughout Southern California needed an overarching system, so interoperability was also needed.

MHO Networks provided the necessary core infrastructure to keep service at its peak, so Fletcher Jones can stay a cut above. That means no downtime and lost revenue. MHO reliability helps them guarantee superior customer service.

“We can’t afford to be down. We did not have a good alternative in our biggest markets. We will save money, and MHO will keep us efficient. It’s a necessity really—to be more competitive.” - Paul Fedel, Director of Information Technology, Fletcher Jones Management Group.

That meant getting new technology up and going within a 60-day time window at the new location. Incipio entered a contract for service with a highly recognized fiber company that is the ILEC for the Corona, CA area. They were promised full service within their 60-day time frame. However, the contracted service provider did not follow through.

In fact, they missed contract deadlines for installation and were unresponsive to queries concerning service and Incipio’s approaching deadline. They were in a terrible bind, when they heard about MHO’s 10-day installation guarantee. They sat down with MHO and explained the dilemma.

MHO technicians had Incipio’s new location completely activated and operational in only 9 days. This included installing a system capable of sustained 100 Mbps speed, and scalable from 20 users at that time to a projected 100 or more.

“I would recommend MHO. Our experience with them has been good; they met their guaranteed turnaround time. There have been no issues with service or speed, and their engineers that were on site were friendly and professional. Everything about MHO gave signs of a solid business.” – Adam Robertson, VP, Technology and Security, Incipio.

Majestic Realty is the largest privately-held developer and owner of master-planned business parks in the United States. They own and operate multi-tenant commercial buildings and other properties in the Los Angeles area. They know the value of maintaining reliable high-speed Internet connections for tenants.

One of their properties had been experiencing multiple internet outages as the building’s fiber carrier struggled to provide reliable service. Majestic needed to find a solution and find one quickly as tenants were beginning to express concerns. Without a quick solution, they could experience occupancy vacancies and lease problems.

Majestic faced limited options, one of which was to bring in cable or fiber Internet at a cost of around $4 million, including an installation time frame of at least 90–120 days. This would only further exacerbate their tenant problems on top of an exorbitant cost.

After enduring three separate outages in a 24-hour period, Majestic turned to MHO, first as a backup, then as the primary provider. MHO provided reliable Internet services for current and prospective tenants, making Majestic’s properties an attractive leasing option, completely installed and operational in only 10 business days.

“Assuring that tenants in a Class-A building are happy with their Internet access can be difficult. Majestic Realty was experiencing continuous issues with the fiber carrier in the building for several months. MHO was able to alleviate all concerns by providing an exemplary service to our tenants. In 10 business days, MHO installed their point-to-point fixed wireless solution to help bridge the gap for tenants who struggled with connectivity. Ever since, MHO has taken over the process and allowed Majestic Realty to focus on what they do best.” – Jason Tucker, IT Infrastructure Manager of Majestic Realty.

Get Help Across the Last Mile

At MHO Networks, we are uniquely positioned to help with the last mile problems that SMB and enterprise businesses commonly face. Because we provide high-speed bandwidth using FCC licensed, point-to-point fixed wireless technology, we can provide service almost anywhere within our network footprint. If this sounds like the solution to your last-mile problems, contact us today.